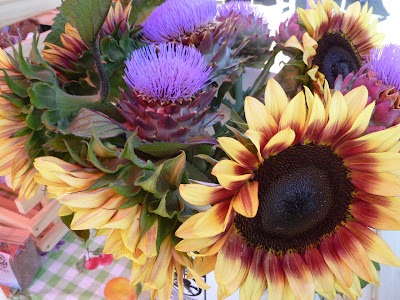 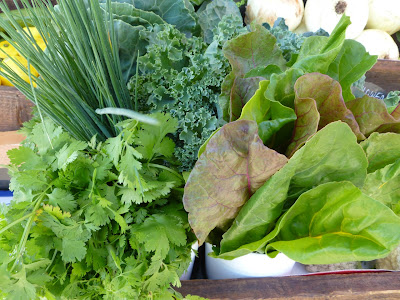 Last Sunday afternoon we decided to go to the Sunday evening concert series in Washburne Park to hear the Eugene Highlanders Pipe Band, because how better to enjoy bagpipes than in an expansive open field. I had a bowl of pizza dough rising, which I repurposed for a loose rendition of Marcella Hazan's Palermo stuffed pizza or sfinciuni. "A coarse version of sfinciuni is indistinguishable from pizza in appearance", writes Hazan scornfully, but a "finer and more fascinating rendition is known as sfinciuni di San Vito, after the nuns of the order who are credited with creating it. It has two thin, round layers of firm dough that enclose a stuffing --called the conza-- which is sealed all around." Long ago the name for this dish permuted in our household to "stuffuchini," which one must admit sounds both impressively Italian and evocative of the final stuffed product, without holding one to the high standards of the San Vito nuns. 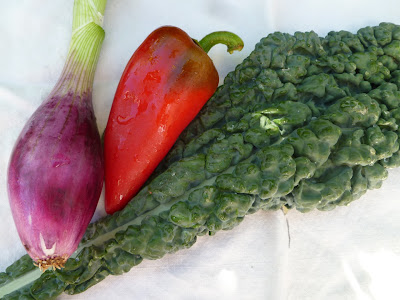 I did not adhere to strict doctrine with my conza, but took inspiration from Hazan's broccoli and cheese sfinciuni, using Sweetwater's Tuscan kale sauteed with their beautiful lipstick peppers and Red Long of Tropea onions. For a side salad, I cooked green and yellow beans just until tender and tossed them with yellow tomatoes and fresh tarragon. The pizzas were still warm as we settled down to enjoy our multicultural picnic of stuffichini and bagpipes. 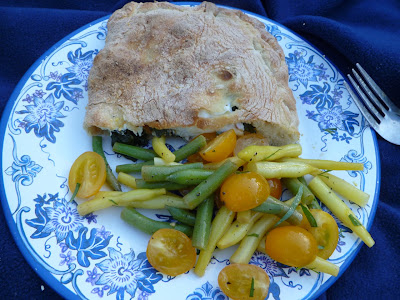 Dough
I used 1 recipe of Jim Layhey's no knead pizza dough, which made enough for a couple of large adult stuffed pizzas and two smaller kids' pizza pockets, but here is Hazan's sfinciuni dough

2. Knead by hand or in a mixer for 5-10 minutes. Add sprinkles of flour as needed. The dough will be soft but shouldn't be sticky.

3. Place in a greased bowl, cover with plastic wrap, and allow to rise for 3 hours, until doubled in volume.

1. Cut the kale leaves from the stems and chop into thin strips. Seed and dice the pepper. Peel and dice the onion. Peel and mince the garlic cloves.

2. Heat a skillet over medium high heat. Add the oil and saute the onions and red pepper until the start to caramelize. Add the garlic and cook a minute longer. Add the kale and red pepper flakes and salt and keep cooking until the kale has started to wilt. Add the vermouth and cook until it has evaporated. Remove from heat.

To assemble and bake the Stuffichini
1. Preheat the oven to 400 degrees. If using, place a pizza stone in the oven. Divide the dough into two balls (if using Lahey's pizza dough recipe, use about 2/3 for the stuffichini). On a floured surface, roll out one ball of dough into a 10 inch disc. Transfer to a cornmeal covered pizza peel or a cornmeal covered baking sheet.

2. Distribute 1 Tbsp of bread crumbs on the dough and drizzle on one tsp of olive oil. Spread the kale filling over the dough, followed by the mozzarella cheese, followed by another Tbsp of bread crumbs, and a drizzle of 2 more tsp olive oil. Roll out the second second ball of dough to a slightly larger circle. Place it over the stuffing and crimp the edges of the two circles of dough securely together, bringing the edge of the lower one up over that of the top one.

3. Brush the top of the dough with water, and then slide the stuffichini onto the preheated pizza stone, if using, or place the baking sheet in the oven. Bake for about 25 minutes, until the dough is golden and hard.  Let the pizza settle for a few minutes to allow the flavors to come together. Cut into pie-shaped wedges and serve.

Trim the beans and blanch in salted boiling water just until tender, about four minutes. Meanwhile, whisk together the vinaigrette of mustard, vinegar, olive oil, salt and pepper. Cut the beans lengthwise into thirds and toss in the vinaigrette. Cut the tomatoes into pieces and toss gently into the salad along with the fresh tarragon leaves.
Posted by Karen at 10:34 AM 1 comment: 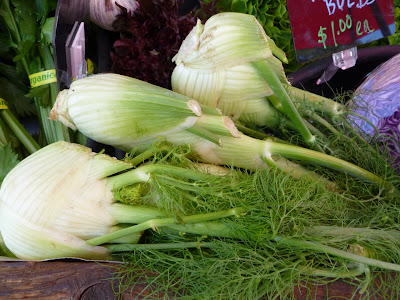 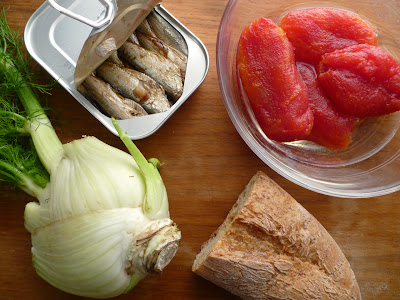 Fennel is the backbone of one of my favorite quick pantry pasta dishes with bright and refreshing flavors that are perfect for a warm summer evening. This recipe illustrates some principles of a well-stocked pantry. First, no pantry is complete without a supply of tomatoes, and the absolute best are freshly preserved (here I used some of my stash of Sweetwater Farm romas frozen last summer). Next, always keep on hand a collection of canned fish,including sardines, salmon, tuna, anchovies, and smoked trout. Lemons and garlic are necessities. And finally, I like to keep a frozen supply of fresh breadcrumbs, which are easily made from the stale ends of Eugene City Bakery baguette run through the grater blade of your food processor. Then all you need to do is pick up a fennel bulb at the Fairmount Neighborhood Farmers Market, and you have a delicious midweek meal lined up to go. 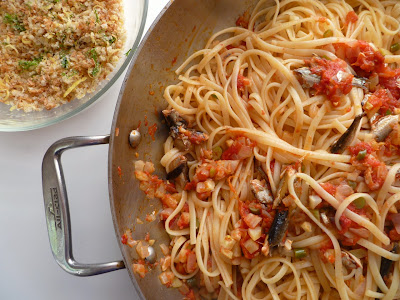 Linguine with Sardines, Fennel and Tomato
adapted closely from lastnightsdinner at food52

1. Bring a very large pot of heavily salted water to a boil. Trim the fennel and slice the bulb very thinly.

2. Open the sardine tin and drain the oil into a wide skillet (the amount of oil in the tin will vary by brand, so add additional extra virgin olive oil if necessary to make up 2 tablespoons). Warm the oil over medium-low heat and add the garlic, cooking until fragrant.

3. Add the sliced fennel to the skillet with a sprinkle of salt, raise the heat to medium, and cook until the fennel is soft and beginning to caramelize. Add the chile flakes and let them sizzle for a minute, just until fragrant, then add the tomatoes with their juice. Cook until the liquid is reduced, then add the vermouth and let that reduce slightly.

4. Add the sardines to the skillet with the tomato and fennel mixture, breaking up slightly but leaving some chunks.

5. Add the linguine to the boiling salted water, cooking it until it is just short of al dente.

6. As the pasta cooks, prepare the breadcrumb topping. Zest the lemon. Mince some of the fennel fronds. If using frozen fresh breadcrumbs, toast them lightly in a toasting oven or dry skillet. Combine a tablespoon or so of zest, along with a teaspoon of minced fennel fronds, with the toasted breadcrumbs, then set aside.

7. Juice the lemon and add the juice to the pan. Taste and adjust salt if necessary.

8. When the linguine is just short of al dente, use tong s to transfer to the sauce to finish cooking, adding a little bit of the starchy pasta water if necessary, and tossing gently to combine. (You'll want the sauce to be a little soupy, as the breadcrumbs will soak up the liquid and dry the pasta out a bit once you've added them.)

9. Transfer the pasta and sauce to a large warmed serving bowl (or individual pasta bowls), add a drizzle of olive oil, sprinkle on the toasted breadcrumb-lemon zest mixture, and garnish with picked small fennel fronds and the remaining lemon zest.
Posted by Karen at 7:42 PM No comments: 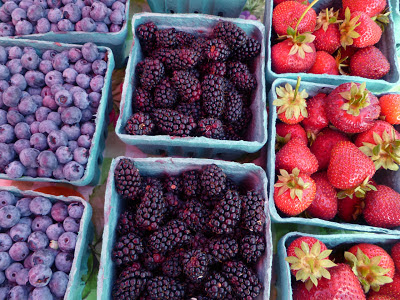 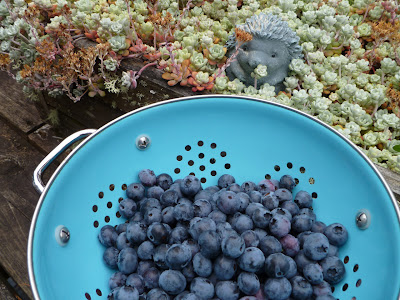 There are so many delicious things you can make with blueberries, like buckles, cobblers and cakes, but my all time favorite is blueberries pancakes. And rather than tucking the blueberries inside (reserve this for winter pancakes you make with your frozen berry stores), I like to pile the fresh berries on top of my pancakes and chase them around my plate as they roll away from my fork. Blueberry pancakes were my father's specialty, and for summer vacations, when we would pack our tiny Datsun B210 with two parents, two kids, two dogs, sheets, towels, beach towels, and inner tubes, the entirety of the kitchen supplies were devoted to my father's breakfast preparation necessities: coffee mill and espresso maker, and a pristine pancake griddle that could not be used for any other purpose. He always made Bisquick pancakes, but in my adult life I've diversified to many types. Right now my favorite are chia seed and buckwheat pancakes, at the top of the list below, but all of these would be delicious with some of Sweetwater Farm's fresh berries. 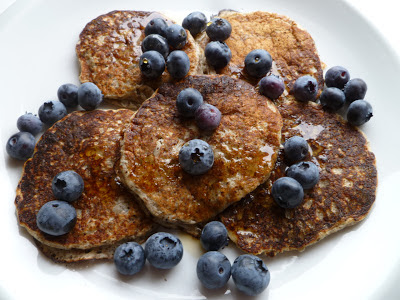 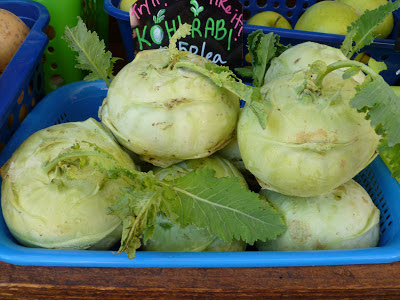 Be sure to include a trip to the Fairmount Neighborhood Farmers Market in your holiday weekend plans. This Sunday you can look forward to the following offerings from Sweetwater Farm and Fair Valley Farm: 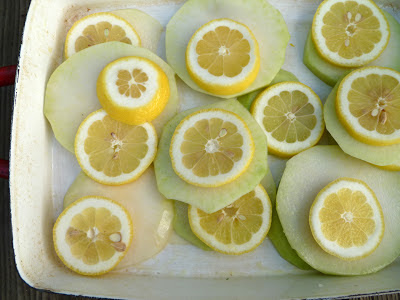 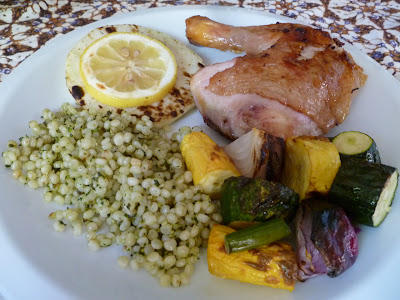 But the best part might have been a salad I whipped up Monday morning with the leftover kohlrabi and a tin of smoked trout (available at Trader Joe's). The smokey flavors of the kohlrabi and fish melded together, the kohlrabi gave the salad crunch, and the parsley and lemon made it all fresh and bright. Definitely a good reason for slapping on some kohlrabi rounds when you next fire up your grill. 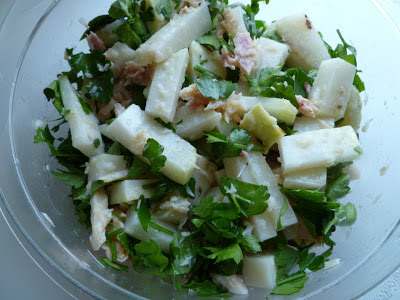 1. Peel the kohlrabi generously with a pairing knife to remove all of the woody exterior and slice into 1/4 inch thick rounds. Rub with a little olive oil and salt generously. Slice the lemon and stack the kohlrabi and lemon slices on top of each other.


3. Slice the kohlrabi into 1/4 inch strips and place in a serving bowl. Squeeze the grilled lemon on top of the kohlrabi and toss with the parsley leaves. Add the smoked trout and oil from the tin, break the trout into bite sized pieces with a fork, and toss again. Taste and add more salt if desire. Enjoy.
Posted by Karen at 7:54 PM No comments: