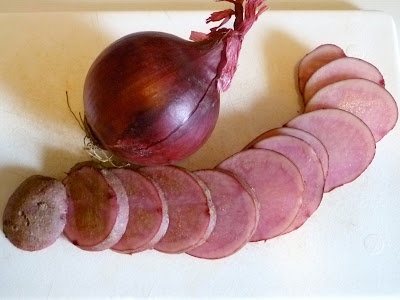 Torrential morning rains prevented the farmers from setting up at the Fairmount Neighborhood Farmers Market last Sunday. Luckily, we had some potatoes from SLO Farm from the previous week, which I decided to prepare in a frittata for lunch. The tubers looked prosaic enough, but when I sliced them open they were a gorgeous magenta color, that contrasted beautifully with the farm's plump little red onions. 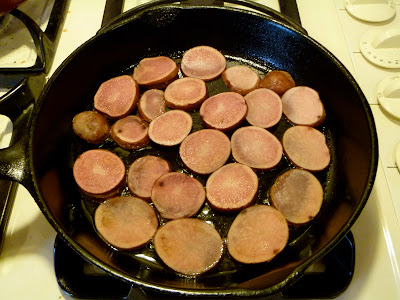 I sauteed the sliced potatoes in a little olive oil, and then added diced onion. When these were nicely caramelized, I poured in beaten eggs and sprinkled on some diced cheddar cheese. After the eggs had firmed up for a few minutes on the stove top, I stuck the pan under the broiler to brown the top.  When it came out of the oven, I garnished it with some fresh chives. The frittata was delicious with the firm potatoes, sweet onions, and melted cheese. 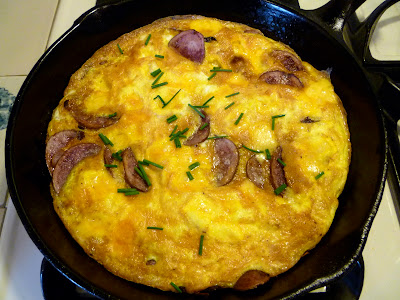 3 small purple potatoes, sliced
1 small red onion, diced
2 Tbsp olive oil
5 eggs, scrambled
salt and pepper to taste
~2 ounces cheddar cheese, diced
chopped chives for garnish
1. Start heating the broiler. Heat oil in an oven proof pan, such as a cast iron skillet. Place the sliced potatoes into the pan and let them cook on one side until they start to brown. Flip them and add the chopped onion. Keep cooking until the potatoes are nicely browned and the onion starts to caramelize.
2. Beat the eggs and add salt and pepper. Pour over the potatoes. Sprinkle over the cheddar cheese. Cook for about 3 minutes until the egg has start to set. Place the pan on an oven rack close to the broiler and cook for about 3 minutes until the top of the frittata starts to brown. Remove from oven, and serve slices garnished with chopped chives.
Posted by Karen at 5:15 AM

Hi Karen,
Love your blog and this Purple Potato Frittata recipe is easy enough for a 'beginner' like me to tackle.
Greetings from Chicago,
Brigitte