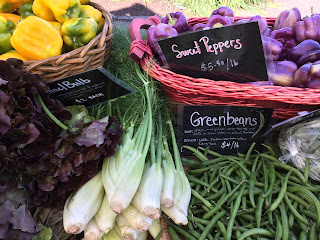 At the Sunday at the Fairmount Neighborhood Farmers Market this week you'll find pastured meats and eggs from Fair Valley Farm and Fog Hollow Farm and fresh produce from Camas Swale Farm, including lots of melons, tomatoes, corn, basil, parsley, and fennel. 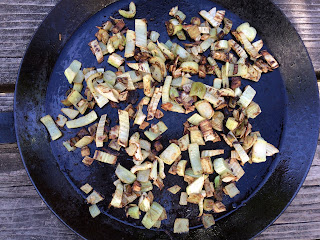 To make a garnish for a pound of Hideaway Bakery ravioli, I experimented with deeply caramelizing diced fennel bulb like shallots or scallions, cooked well past "glassy," almost to the point of "burnt." This treatment mellowed the anise flavor and brought out a nutty sweetness that added complexity to a rich cream sauce, once again proving the utility of the Maillard reaction. 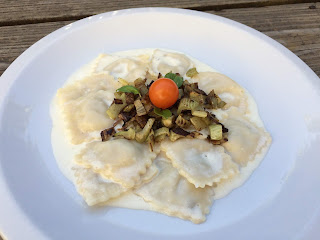 Wash and trim the fennel bulb, reserving the fronts for stock or garnish. Cut the bulb like an onion into a 1/4 inch dice. Heat a skillet over medium heat. When it is hot, add the oil and butter. When the butter foams, add the diced fennel and a pinch of salt. Cook, stirring frequently and watching it like a hawk to ensure that the fennel pieces brown nicely but do not burn, about 15 minutes. Remove from heat, taste and season with more salt and pepper, and serve on top of your favorite pasta or grain dish.
Posted by Karen at 11:05 PM No comments: 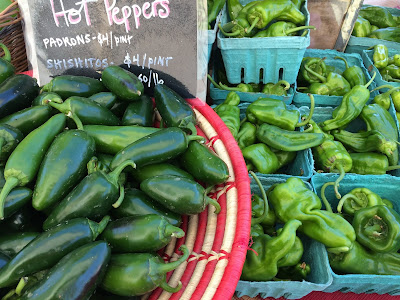 At the Sunday at the Fairmount Neighborhood Farmers Market this week you'll find pastured meats and eggs from Fair Valley Farm and Fog Hollow Farm and fresh produce from Camas Swale Farm, including plenty of tomatoes and a selection of spicy peppers: jalapenos, padrons, and shishitos.

Don't let the summer go by without savoring a classic BLT. And as a few accompaniments, I can recommend some cool cucumbers, some blistered padron peppers, and a smoky grilled eggplant salad. 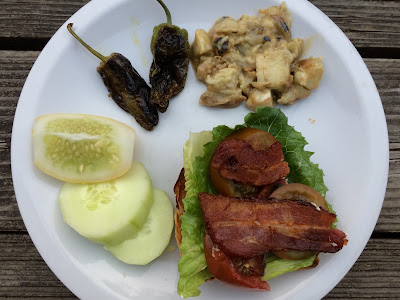 1. Hold the eggplant with tongs directly over a stove burner until it is scorched on all sides and softened to collapsing (for a bigger eggplant, you can start it over the burner and finish it in the oven. Or you can cook it whole in a grill).

2. Mix together the dressing of tahini, vinegar, olive oil, and salt.

3. When the eggplant is cool enough to handle, remove the top and the blistered peel (you don't have to be a perfectionist about this, some lingering char is nice). Cut into approximately 1/2 inch dice and fold into the dressing. Serve warm or at room temperature.
Posted by Karen at 11:42 PM No comments: 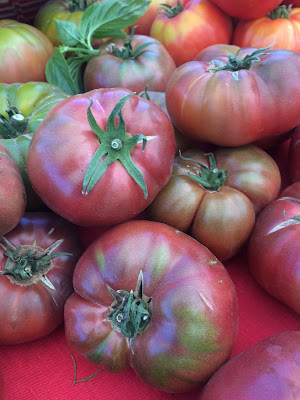 At the Sunday at the Fairmount Neighborhood Farmers Market this week you'll find pastured meats and eggs from Fair Valley Farm and Fog Hollow Farm, cut flowers from Tiger Lily Art Company, and fresh produce from Camas Swale Farm, including lots of tomatoes. 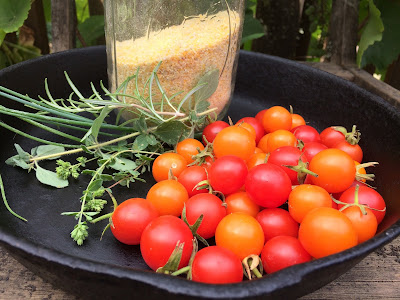 When tomatoes are at their summer sweetest, I love eating them lightly roasted with fresh herbs. As a vehicle for their fragrant juices, I decided to make some polenta, using this Bon Appetit recipe for Instant pot polenta cacio e pepe. 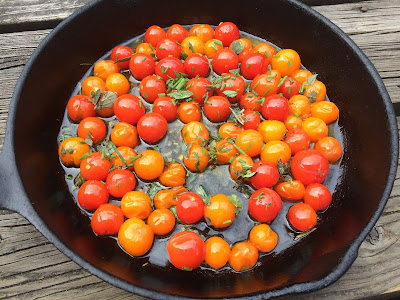 While the polenta cooked (in just 9 minutes), I roasted a pan full of cherry tomatoes with rosemary. Then I sprinkled on some more delicate herbs (chives, thyme, and oregano), poured over the polenta and ran it under the broiler. At this point, one could let it cool and harden and cut wedges to eat, but we couldn't wait for that and instead ate it as a delicious porridge spooned into bowls. 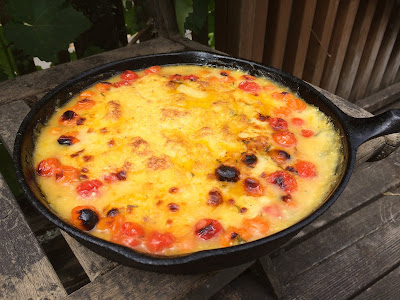 1. Preheat the oven to 450 degrees and put in a cast iron or oven safe skillet to warm. Rinse and the cherry tomatoes and herbs. Chop the rosemary leaves. Separately chop the other herbs.

2. In an Instant Pot, combine the polenta, water, salt and pepper. Cook on high pressure for 9 minutes and then release the pressure manually. Whisk the contents of the pot, adding 1 Tbsp of butter and the grated cheese, until it is a thick porridge. One can also prepare the polenta on the stove top like this.

3. While the polenta is cooking, remove the warm skillet from the oven. Put 1 Tbsp of butter into the skillet to melt and then add the cherry tomatoes and chopped rosemary and roll around to coat. Roast the cherry tomatoes for about 12 minutes until they have collapsed and released some juices.

4. Remove the pan from the oven and turn the setting to broil. Sprinkle the other chopped herbs onto the cherry tomatoes. Use a spatula to layer the cooked polenta onto the roasted tomatoes. Put under the broiler for about 5 minutes until the top is golden brown. Serve immediately, spooning into dishes, or allow the pan to cook until the polenta has hardened and can be cut into wedges. Enjoy.
Posted by Karen at 2:36 PM No comments: 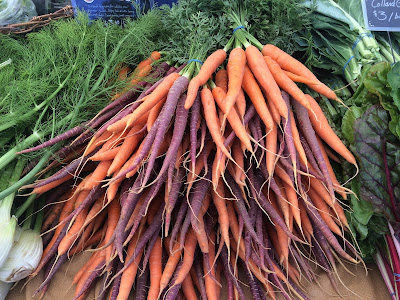 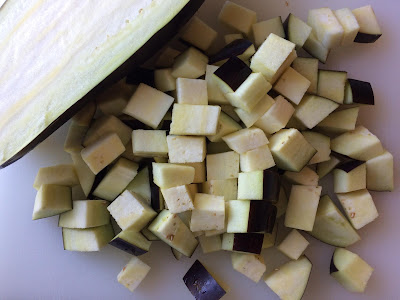 For the past year I've been cooking many variations on this chickpea pasta dish, in which the pasta cooks in chickpea broth, absorbing all of the flavors. It's come to the point that the rest of my family members will roll their eyes when I suggest this dish. But tasked with bringing a side dish to a work picnic, I thought of a new variant on the theme: cooking pasta for a salad in the same broth used to cook chickpeas that I then roasted, along with eggplant and carrots, to layer on top. The pan was empty by the end of the picnic. 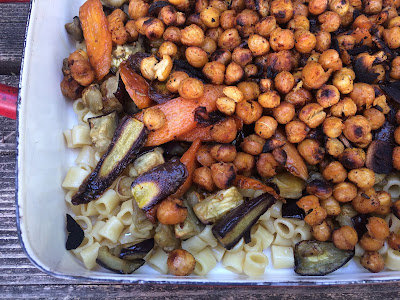 1. Rinse the chickpeas, transfer to a large cooking pot or Instant Pot insert, add water until they are covered by 2 inches, add 2 tsp salt, bay leaf, and a drizzle of olive oil. Cook on low heat until soft through or if using an Instant Pot, cook on high pressure for 40 minutes and allow the heat to release naturally.

2. When the chickpeas are cooked, drain them and reserve the cooking liquid. Taste and add more salt if needed. Return the chickpea broth to the pot, bring to a boil, and cook the pasta until just cooked but still firm. If using an Instant Pot, cook the pasta on low pressure for 5 minutes. Drain the pasta, toss with a little olive oil, and reserve.

3. Meanwhile prepare the vegetables. Cut the eggplant into 1/2 inch cubes, toss with a tsp of salt, and allow to drain for at least 20 minutes. Clean and trim the carrots and cut into 1/8 inch thick ovals.

4. Preheat the oven to 400 degrees and place in two sheet pans. In a mixing bowl, combine the cumin seeds, smoked paprika, and a pinch of salt. Peel and slice the garlic cloves and add to the bowl. Use a vegetable peeler to peel the lemon and cut the lemon peel strips into thin matchsticks and add to the bowl. Add the chickpeas and a generous drizzle of olive oil and mix to coat the chickpeas with the spices. Transfer the chickpeas to one of the hot sheet pans and roast for about 30 minutes, shaking the pan occasionally, until they are well crisped and starting to brown.

5. In the same mixing bowl, toss the carrot slices with a another drizzle of olive oil and pinch of salt and transfer the carrots to the second sheet pan. Roast for about ten minutes, flipping once with a spatula, until they are cooked through and browned at the edges.

6. In the same mixing bowl, toss the drained eggplant cubes with another drizzle of olive oil. When the carrots are done, transfer them to a bowl, spread the eggplant cubes on the  hot sheet pan, and return it to the oven. Roast the eggplant cubes for about twenty minutes, shaking the pan occasionally to flip, until they are cooked through and browned at the edges.

7. Assemble the salad. On a serving platter, layer the pasta, then the eggplant cubes, then the carrots, and then the chickpeas with all of the roasted cumin seeds, lemon peel, and garlic slices. Juice the lemon and drizzle over the platter, along with a final drizzle of olive oil. Serve at room temperature.
Posted by Karen at 7:22 PM No comments: