Cooking with Kefir and a Chocolate Mousse Tart 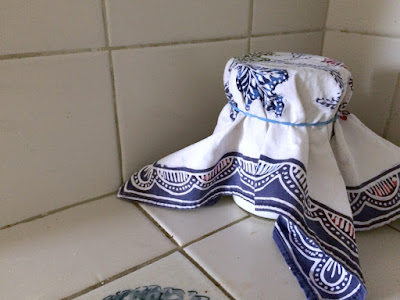 My latest fermentation project, following in the footsteps of sauerkraut and bread starter, has been to culture kefir. To maintain this culture, you simply transfer a tablespoon of kefir to a fresh cup of milk and let it sit on your kitchen counter for about 24 hours. The result is a tart, thickened milk that I've started deploying in all sorts of guises. 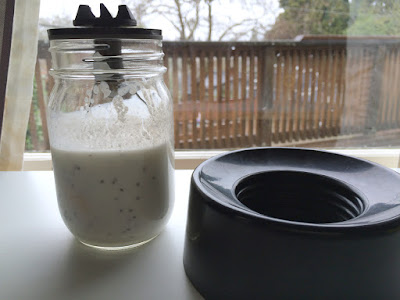 Using regular pint Mason jars for the culturing lends itself to preparing smoothies with my favorite trick of screwing the blender blade directly onto the jar. If you like, you can make yourself a daily smoothie after passaging a tablespoon of kefir for the next batch. 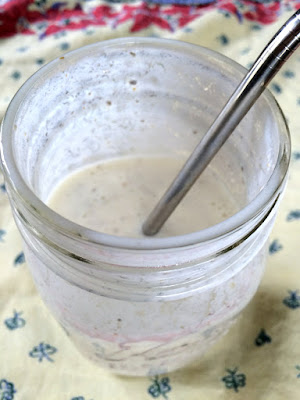 I've been preparing smoothies with about a cup of kefir, a half banana, and a teaspoon each of honey and chia seeds, which make a perfect midmorning snack. 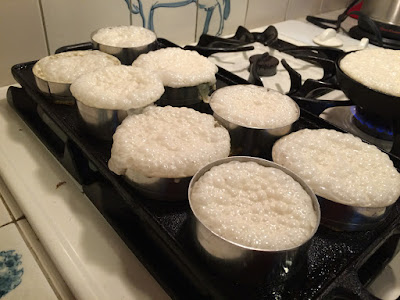 I also found that adding a spoonful of kefir resulted in an extremely exuberant bread starter crumpet batter (reminiscent of Katharine Hepburn's waffle batter from Woman of the Year) and deliciously spongey crumpets. 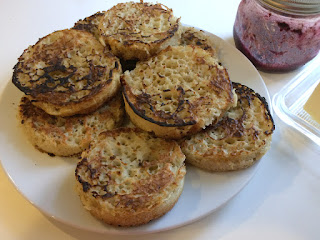 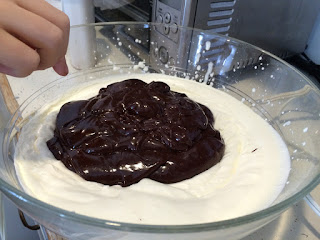 A final, recent use for my kefir was to add a bit of tartness to a chocolate mousse tart. Truth be told, this tart, for my son's birthday, was entirely motivated by my desire to use up a rye flour pie crust I had prepared for Thanksgiving and then accidentally left behind in the freezer when we dashed to the coast. Rye and chocolate is a classic combination, and filling a pie crust with chocolate mousse seemed like an easy way to please a newly minted eight year old. 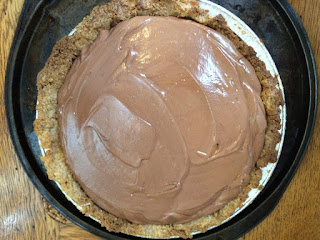 I started with this recipe, and then, inspired by the success of using creme fraiche in chocolate fondue, I whipped in some kefir with the heavy cream (I've also used my kefir to culture heavy cream into creme fraiche, which works very well, but in this instance, I didn't have time). The resulting tart was a big success with the beaming birthday boy. 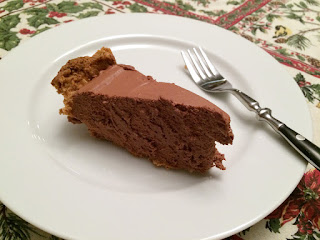 Combine the flour and salt in a food processor and mix. Pulse in the butter cubes until they are lima bean sized. Then add enough water for the dough to just come together when you press it between your fingers. Mold into a disc, wrap with plastic wrap, and refrigerate for at least 30 minutes. Roll out into a 12 inch disc, drape into a buttered tart pan, flute the edges and patch where you need to, and now chill again for at least 30 minutes. Preheat the oven to 450 degrees. Cover the crust with aluminum foil and use rice or beans as pie weights. Bake for 10 minutes, then allow to cook completely before you fill the crust.

2. Beat remaining 1 3/4 cups of of cream, 1/4 cup kefir, and 1/4 cup sugar in large bowl to stiff peaks. Fold the whipped cream into the chocolate mixture. Pour the mousse into prepared crust. Chill until set, about 6 hours.
Posted by Karen at 10:34 PM 1 comment: 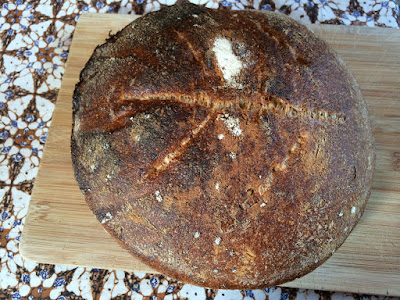 It's been a busy fall, but with the term winding down, I finally turned my attention to my neglected bread starter and started coaxing it back to life with daily feedings. In a few days, it was bubbling  away happily and over the weekend it raised a fine loaf of rye and red fife flour. 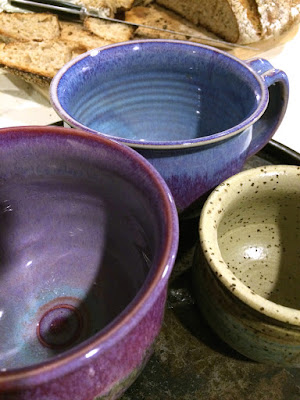 With the baking bread aromas filling the kitchen, and a steady drizzle outside, I decided to make some French onion soup for dinner. I caramelized a big pot of onions (saving some for a future mujaddara), and thawed a quart of chicken stock. The recipe I followed from the kitchn, based on Julia Child, called for an hour of cooking the broth with the onions, and another 20 minutes in the oven, but I admit to skimping on both, because we were all too hungry to wait. The resulting soup was deliciously decadent for a rainy day. 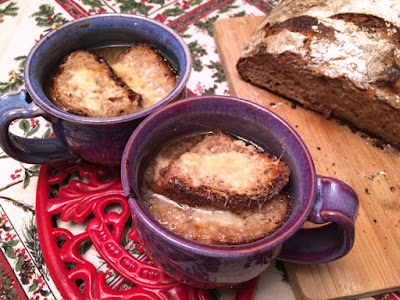 1. Peel and cut each onion into half moons: Slice each half of the onion into thin, evenly-sized half moons and cut the half moon slices in half. You will have at least 3 cups of chopped onions. But don't worry too much about quantities with this recipe; if you have an extra onion to use up, throw it in!

2. In a large pot, melt the butter with the oil over medium-low heat. After the butter foams up and then settles down, add the onions and stir to coat with the butter. Cover the pan and cook for 15 minutes on low heat.

3. Remove the lid. The onions should have wilted down somewhat. Stir in 1/2 teaspoon salt, a generous amount of black pepper, and 1/2 teaspoon sugar (this helps the onions caramelize). Turn the heat up to medium and cook, uncovered and stirring every few minutes, until the onions are deeply browned. This will take 40 minutes to 1 hour. Turn down the heat if the onions scorch or stick to the pan; the browning doesn't come through burning, but through slow, even caramelization.

4. Heat the broth: As the onions approach a deep walnut color, heat the broth in a separate pot. Add the wine and allow to cook down. Then add the hot broth to the caramelized onions and bring to a boil. Cook gently over low heat for about 1 hour (I only did this for 20 minutes). Taste and season with additional salt and pepper if needed.

5. Heat the oven to 350°F. Divide the soup between small but deep oven-safe bowls. Top each with a slice (or two) of toasted bread and sprinkle grated cheese in a thick layer over the bread and up to the edge of the bowl. Place the bowls on a baking sheet or in a casserole dish. Bake for about 20 minutes until the cheese is thoroughly melted (I did this for 5 minutes).