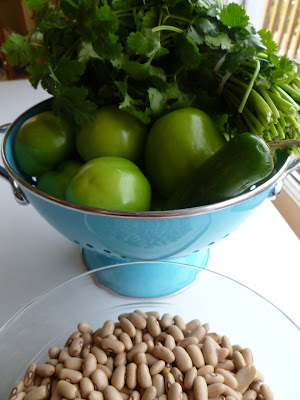 This past weekend I think I officially became a bean snob. I recreated a favorite dish I've made many times before, inspired by a recipe from Rick Bayless' Mexican Everyday cookbook, in which you slow cook pork in tomatillos, and finish with canned white bean. But this time I added Arikara dried beans from Lonesome Whistle Farm during the cooking process, and the end result was so delicious, that I can't imagine ever using canned bean in this dish again. 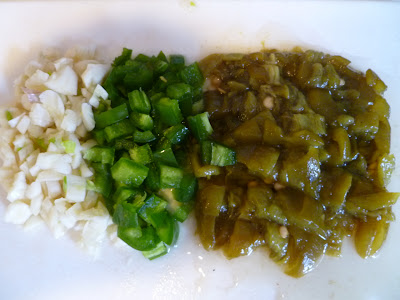 Rick Bayless' dish involves a sauce of chopped tomatillos, flavored with cilantro, garlic, and pickled jalapenos. I added a fresh jalapeno as well for a little extra heat. 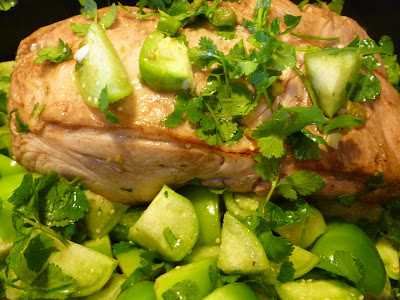 In the Bayless version, he seasons cubed pork with Worcestershire sauce, which gives a nice depth to the tart tomatillos. Rather than bothering to cube the pork, I've taken to cooking an entire pork roast until it becomes soft enough to shred like pulled pork. I start by coating the roast with Worcestershire sauce and searing it for a few minutes, before layering in the tomatillos, cilantro, garlic, and jalapenos. This time I cooked the dish on high in a slow cooker for 3 hours, at which point the tomatillos had cooked down into a remarkably liquid sauce. 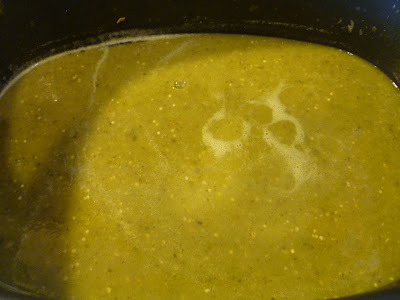 I removed the pork to a plate and used a immersion blender to puree the sauce. Then I added back the pork and 2 cups of rinsed Arikara beans. I set the slow cooker on low and continued the cooking process for another 3 hours. 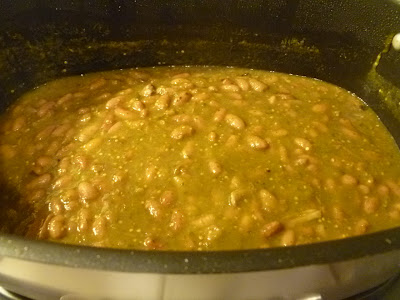 I anticipated having to add in some water, but in fact the beans stayed submerged in their tart green bath and plumped and softened nicely. 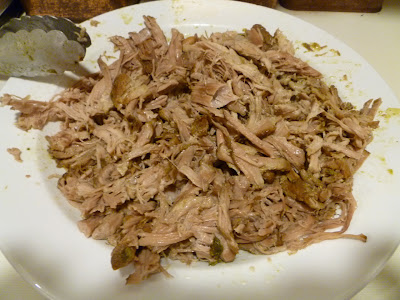 When the beans were tender, I removed the pork and shredded it. Then I recombined everything and it was ready to serve.

To accompany the tomatillo beans and pork, I prepared a slaw that incorporated the crunchy sweetness of carrots, refreshing taste of jicama, brightness of red peppers, and sharp bite of radishes against a background of slightly pickled cabbage. 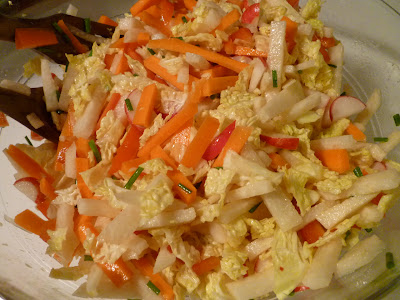 One could prepare the vegetables by shredding them in a food processor, but I think they retain a more satisfying crunch when julienned by hand. To contrast the cilantro flavor in the beans, I used fresh chives, which also hold up better over time (even using a very small cabbage, this recipe made enough for several days). 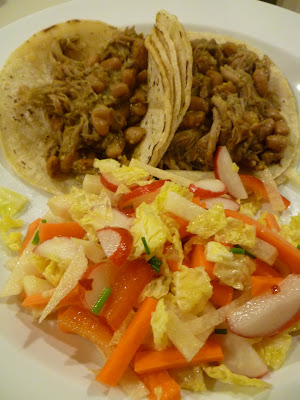 The final meal was a delicious improvement on a family favorite.

1. Douse the pork with Worcestershire sauce all over. Heat the oil and sear the pork on all sides until it starts to brown. Remove from heat and put in a slow cooker. Husk the tomatillos and cut them into chunks. Seed the fresh jalapeno and coursely chop both kinds of jalapenos, and the garlic cloves. Use scissors to cut off the leaves of the cilantro. Add all of these to the slow cooker, and cook on high for about three hours.

2. Remove the pork to a plate. Use an immersion blender to puree the tomatillo sauce until smooth. Add the beans and, if needed, enough water to ensure that they are submerged. Add back the pork and cook on low for about three hours, until the beans are soft.

3. Remove the pork and use a fork to shred. Salt the beans to taste. Stir in the shredded pork and keep warm. Serve on warm tortillas with a crunch slaw.

2 carrots
1 small jicama
12 radishes
½ red bell pepper
½ savoy cabbage
1 handful of chives, chopped
3 limes
½ cup rice vinegar
1 tsp sugar
¼ tsp red pepper flakes
3 Tbsp olive oil
salt to taste
1. Remove the outer layers of the cabbage if damaged, core and chop finely. In a small sauce pan combine the juice of 2 limes, rice vinegar, sugar, red pepper flakes, and salt to taste, and heat until the sugar and salt dissolve. Pour over the chopped cabbage, mix, and allow the cabbage to pickle for a few minutes while you prepare the other vegetables.

3. When you are ready to serve the slaw, stir the crunch carrots and company into the cabbage. Adjust seasoning to taste.

I've made this before too and it's delicious, but the dried beans sound great. I love the idea of a slaw as a side: sort of like pulled pork and slaw, but different spicing!