Kale, Beet, and Quinoa Salad for the First Spring Market 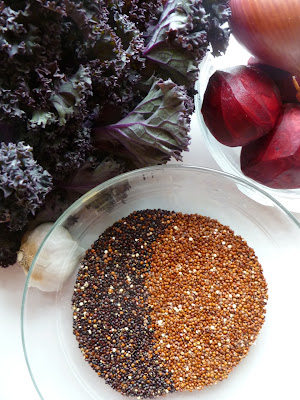 Hooray! Mark your calendars because the start date for the 2011 Fairmount Neighborhood Farmers Market is set for Sunday April 17th! Celebrate having filed your taxes by coming down to the corner of Agate and 19th Street between 10 am and 2:30 pm for some early spring produce. In honor of this auspicious news, here's a warm salad with some ingredients one might expect to find at the market: kale and beets.

This recipe starts with the rich colors of black and red quinoa (ever since a pantry shortage last summer, I've been making mixtures of different colored quinoa, or "confetti quinoa"). I paired the grain with a similar pallet of vegetables: purple kale and red beets. For a hearty salad, I decided to experiment with roasting both the kale and the beets, each with its own allium, to contrast how the different vegetables react to high heat. 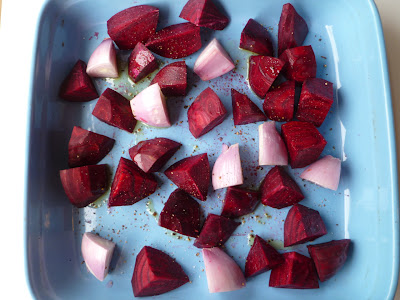 To prepare the beets, I peeled and chopped them, along with a couple of shallots, and tossed them in olive oil, salt and pepper. Then I roasted them for about 30 minutes, until the beets were tender and the shallots had started to caramelize. 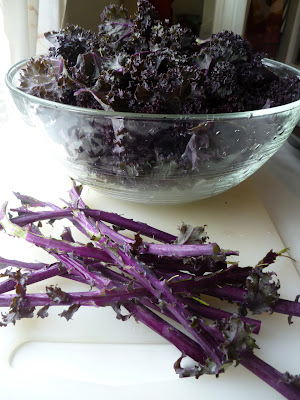 Meanwhile I cut the kale leaves from the hard stalks, tossed them with chopped garlic, olive oil, salt and pepper, and added them to the hot oven for about 15 minutes, until they just started to brown around the edges. 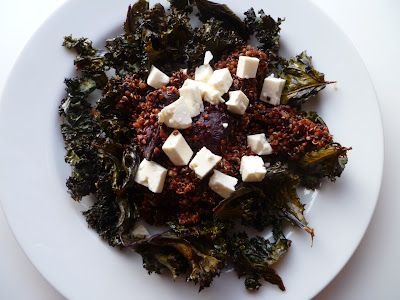 The toasted, garlicy kale became the crisp base of the salad onto which I layered the quinoa and sweet, soft beets, tossed in a vinaigrette made from the roasted shallots. I finished the salad with a sprinkle of sharp feta, for added richness. Served warm, this would make a delicious post Farmers Market lunch.