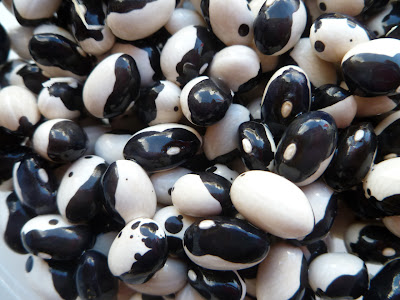 These black and white calypso beans from Lonesome Whistle Farm are so striking that they inspired me to create an entire black and white meal, like the Ascott opening race scene from My Fair Lady. 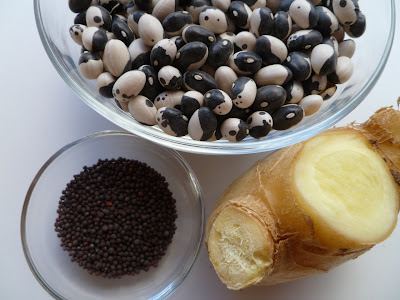 I've been reading more recipes for Indian bean dishes and noticed that many of them, rather than starting with aromatics sauteed in oil to create a broth for the beans, instead simmer the beans first and then finish them off with a tarka, or sizzling topping of oil, spices, and aromatics. For the calypso beans, I decided to simmer them in coconut milk, similar to these red lentils, and then finish them with a tarka of ginger and black mustard seeds. 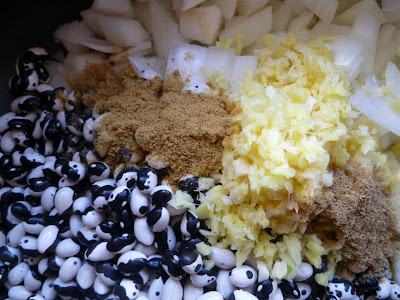 In a slow cooker I combined the beans, some chopped white onion, minced garlic and ginger, ground cumin and coriander, coconut milk, and water. A traditional Indian dal would cook the beans until they are very soft, but for these calypsos I cooked them just until tender, which I noticed was just at the point when their black coloring lightened to brown. 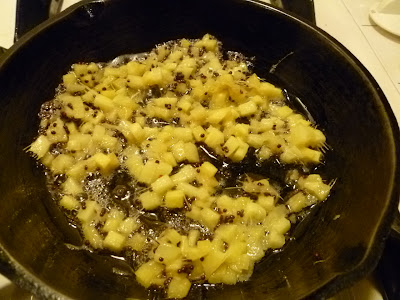 Then I prepared a rich tarka of diced ginger and black mustard seeds sauteed in butter, and stirred this into the beans. To accompany them, I prepared some black and white rice (wild rice stirred into jasmine). And for a vegetable side, roasted cauliflower. The final meal wasn't as starkly black and white as George Cukor's sets, but the contrasting flavors and textures were delicious. The fragrant coconut milk and punch of ginger nicely complimented the potato flavor of the calypso beans without overpowering them, and these went well with the nutty rice and roasted cauliflower with caramelized onions. 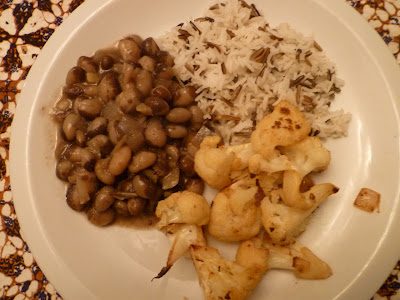 1. In a slow cooker or stovetop pot, combine the beans, onion, ginger, garlic, spices, coconut milk and water and cook with low heat, stirring occasionally (if using a slow cooker, swish the pot around rather than open the lid) until the beans are soft and have just turned from black to brown. In my slow cooker, the beans were done after 3 hours on the low setting.

2. To prepare the tarka, heat the butter or oil and saute the ginger and mustard seeds over medium-low heat for at least five minutes until the mixture is fragrant. Stir into the beans and serve.