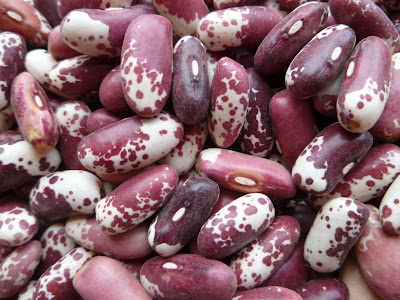 These beautiful red and white speckled Jacob's cattle beans from Lonesome Whistle Farm are an heirloom variety from Prince Edward Island, which, according to legend, were a gift from Maine's Passamaquoddy Native Americans to Joseph Clark, the first child of European decent born in Lubec, Maine. They're described as holding their shape well during cooking, so they seemed like a good choice for a hearty bean stew. 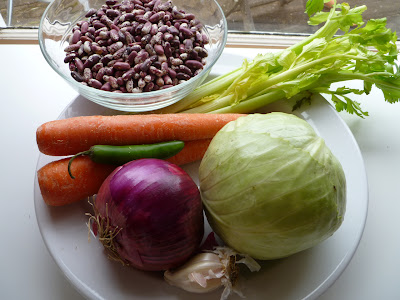 I had been saving the bone from a bone-in-ham we'd baked for just such a stew. Then this week's New York Times Dining section had a recipe by Melissa Clark about ham bone soup, with shredded cabbage cooked into a silky broth. Returning from the Hideaway Farmers Market, where I'd picked up a lovely little cabbage and some parsnips and yellow beets from Cinco Estrella Farms, I realized that I had all the ingredients in the house to make a similar dish. 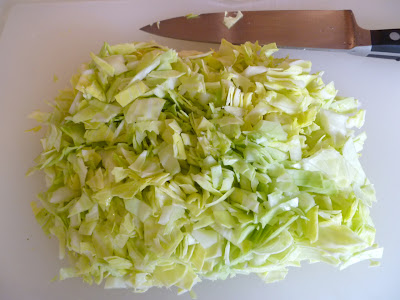 First I got the frozen ham bone simmering in some water, while I chopped the cabbage, onion, carrots, celery, garlic, and a serrano pepper for a little heat. 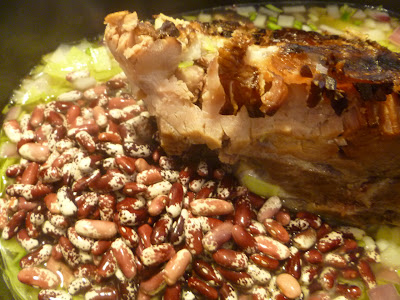 Then I combined all these with the Jacob's cattle beans, ham bone, and water in a slow cooker to cook on low for 4 hours, until the beans were tender and the cabbage had dissolved into the broth. Even though we'd carved our ham conscientiously, after simmering the bone released an amazing amount of meat that I shred and added back to the pot, turning the dish into a substantial stew. 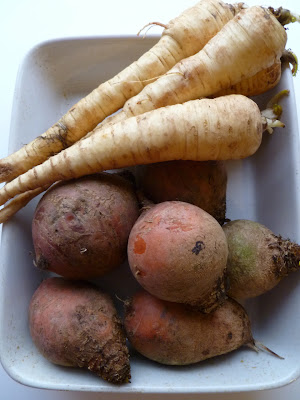 I still had those beets and parsnips, which I'd been planning to roast, and it occurred to me that they might make a nice garnish for the stew, as a sort of riff on a tarka. 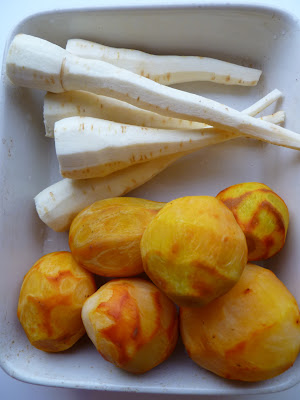 They were gorgeous when peeled, and delicious when chopped and roasted in olive oil. The final dish was a real one pot meal with the hearty beans and ham in their silky broth contrasting nicely with the sweet roasted vegetables. 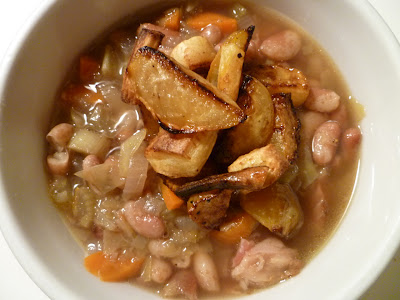 Jacob's Cattle Bean and Ham Stew with Roasted Vegetable Garnish
For the stew
1 ham bone or ham hock
2 cups (1 lb) Jacob's cattle beans, rinsed, or substitute kidney beans
1 small or 1/2 regular cabbage, chopped well
1 onion, chopped
2 carrots, peeled and sliced
4 celery stocks, chopped
5 cloves garlic, minced
1 serrano pepper, seeded and finely chopped
2 bay leaves
7 cups water
For the garnish
6 parsnips, peeled and chopped into chunks
6 small beets, peeled and chopped into chunks
2 Tbsp olive oil
salt and pepper to taste
1. In a slow cooker or soup pot, combine all of the stew ingredients. Cook on low for about 4 hours until the beans are tender, stirring occasionally. If cooking on the stovetop you may need less time and more water to maintain a thick stew consistency. Remove the ham bone or hock from the pot, shred the ham from the bone, and return the meat to the pot. Adjust seasonings to taste.
2. About 45 minutes before you plan to serve the soup, preheat the oven to 450 degrees. Peel and chop the parsnips and beets. In an oven safe dish, toss the vegetables in olive oil, salt, and pepper. Roast for 30 to 40 minutes, stirring occasionally, until soft and browned. Serve the stew with a spoonful of roasted vegetables on top.
Other heirloom bean recipes:
Calypso beans with ginger and black mustard seeds
Ireland Creek Annie Bean Bruschetta
Lemon and herb Dutch bullet beans
Minty green flageolet beans
Dutch bullet beans and roasted squash soup
Rio Zape beans with toasted chile sauce
Arikara bean gratin
Calypso bean and leek soup
Posted by Karen at 9:29 PM