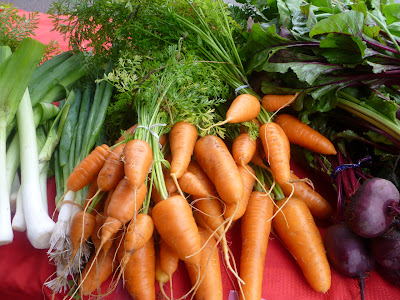 This Sunday at the Fairmount Neighborhood Farmers Market you can expect the following produce from SLO Farm, Sweetwater Farm, and Songbird Farm: 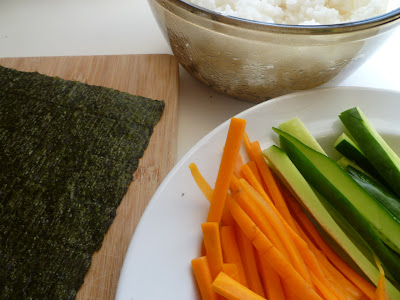 Songbird Farm sells these sweet, plump carrots, which became the core of a rainy day sushi rolling activity. The kids' renditions had none of the elegant symmetry of professional sushi, but they tasted delicious with our tsukemono (from Ume Grill's recipe), along with some teriyaki beef and sesame spinach and edamame beans. And the kids has so much fun rolling these that they made plenty of extras, solving the problem of what to pack for lunch the following day. 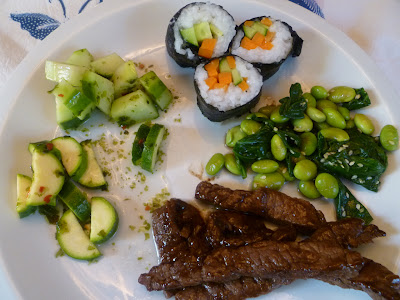 1. Combine the sushi rice, the water, and a pinch of salt and cook over low heat, covered, until the water is absorbed, about 20 minutes. Stir in the rice wine vinegar.

3. Spread several spoonfuls of rice over each sheet of nori, arrange a stripe down the center of about 4 carrot and 4 cucumber matchsticks, roll up and use a little water to adhere the edge of the nori sheet back onto itself. Carefully cut into pieces with a serrated knife. Serve with wasabi, pickled ginger, and soy sauce.
Posted by Karen at 10:22 PM